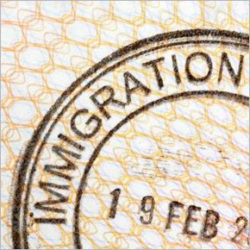 Deportation (also called “removal”) is a process when the federal government (“DHS”) formally deports an person from the United States for violations of a number of immigration or criminal laws. Once deported, such person may lose the right to ever return to the United States, even as a visitor. In certain cases such dire consequences could be overcome through a waiver.

Removal is a legal proceeding, and a person who is subject to this procedure has legal rights prior to being deported from the US, including the right to challenge the removal itself. To learn more about your immigration rights please visit www.ImmigrationRaid.org

Any alien that is in the United States may be subject to deportation or removal if he or she:

A Notice to Appear (NTA) is issued by the U.S. Immigration and Customs Enforcement, served to the alien, and filed with the immigration court. In addition to containing general information about the immigrant (name, country of origin, etc.), the NTA also states the reasons for the deportation or removal.